So I’ve gotten some emails from you guys wondering where I’ve been hiding out (thank you SO MUCH for these, btw) and it’s nothing super exciting.  I’ve been pulled in a bunch of different directions and it has honestly left me with very little time to create.  One of the big problems, if you can really call it a problem, is that I started working out three months ago.  On one hand, I feel great, but on the other hand, it has cured me of my insomnia and so I’m no longer up half the night making stuff.

The other thing I’m struggling with, as many crafters are, is just trying to do too many projects at the same time.  I’m trying to knit stuff because knitting is my first love, learn a bunch of new crafty things, and I just got a new Silhouette cutting machine that I’m getting the hang of.

I have a couple pictures to share since the last time I posted (yes, they were on on my FB and Instagram accounts, so my apologies if you’ve seen them already):

This was a super fast, very fun knit, but the only part where I got into trouble is when I connected the button band to the rest of the body.  If you’ve ever made a top down raglan before, you know that the top of the front sections my the shoulders tend to not come down in a perfect V, there’s a little corner that sticks out.  I couldn’t pick up the button band stitches in a way that eliminated that corner, so there is a little bulge there and it just won’t lay flat.  Not a huge deal, but definitely something I’ll try to avoid in the future.

April – I’ve been getting a little time in here and there for embroidery, but to tell you the truth, I’m not sure I really have the patience for it.  It does look so cool, but I’m soooo slow. And I keep losing my needle threaders…

I’ll finish the last letter and a half eventually 🙂

May – I finally unpacked my new Silhouette Cameo, and made a few stencils.  This thing definitely has a steep learning curve.  If you are wondering why I haven’t cranked out a ton of stencils (or anything else yet), let me tell you about what happened the first weekend it was out of the box.

So I unpacked the machine and went through what I thought was the whole set up process – installing the drivers, installing the software, registering the machine, etc.  It’s all set to go, and I decide to go to sleep and pick it up the next day by cutting my first project.

I get up, go right over to the machine and I’m so excited to get started.  It’s not working.  The touch screen on the Cameo just says, “working,”even though it’s not, and appears totally frozen.  I google the problem and it seems to be the drivers.  I update the drivers and the software and it’s still stuck.  I shut down the machine, the computer, unplug everything and restart a bunch of times.  Nothing.

I am freaking out at this point because this is not a cheap machine, and I am having anxiety about calling customer service because we’ve all had those nightmare call center situations.  I had no other options, so I try the chat window on Silhouette’s site.  The rep emailed me a list of instructions and said try this, and if it doesn’t work, let me know.  I go through the instructions, which had to do with resetting the ports on the computer, and it still doesn’t work.  So the rep calls me within about 10 minutes and we try everything to fix this issue.

It turns out that the problem is that when I unplugged the Cameo from the wall, I didn’t unplug the adapter cord from the machine itself.  There must’ve been a little juice left in the cord, just enough to prevent the machine from resetting.  Once I plugged both ends of the adapter back in, the touch screen was back to normal and I was ready to go.

Seriously, I have never received such great service from any company, and this was on a Saturday afternoon.  The rep stayed with me on the phone for about 45 minutes and was determined to fix the problem right then and there.  And she was super nice!

Anyway, once I was up and running, I started experimenting with cutting stencil film.  I made every possible error before I got a good cut.  I had the blade turned up too little and it didn’t cut the film at all or even touch it.  I had the blade turned up too much and CUT THROUGH THE MAT.  Ugh.  Then I had the stencil film upside down so the words were all backwards.  There were a bunch more.

Finally I ended up with a decent cut and stenciled my first shirt: 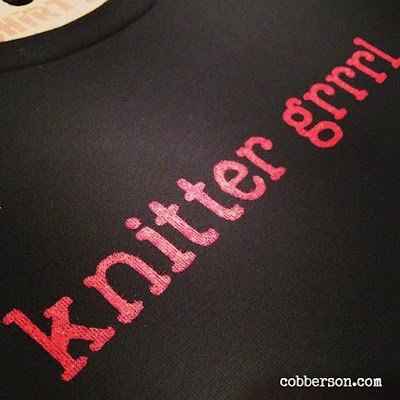 So that’s pretty much it.  What are you guys working on this month?

*There are some affiliate links in this post, but I did NOT receive anything gratis.  All opinions are my own, and the links are all for stuff I bought and loved*